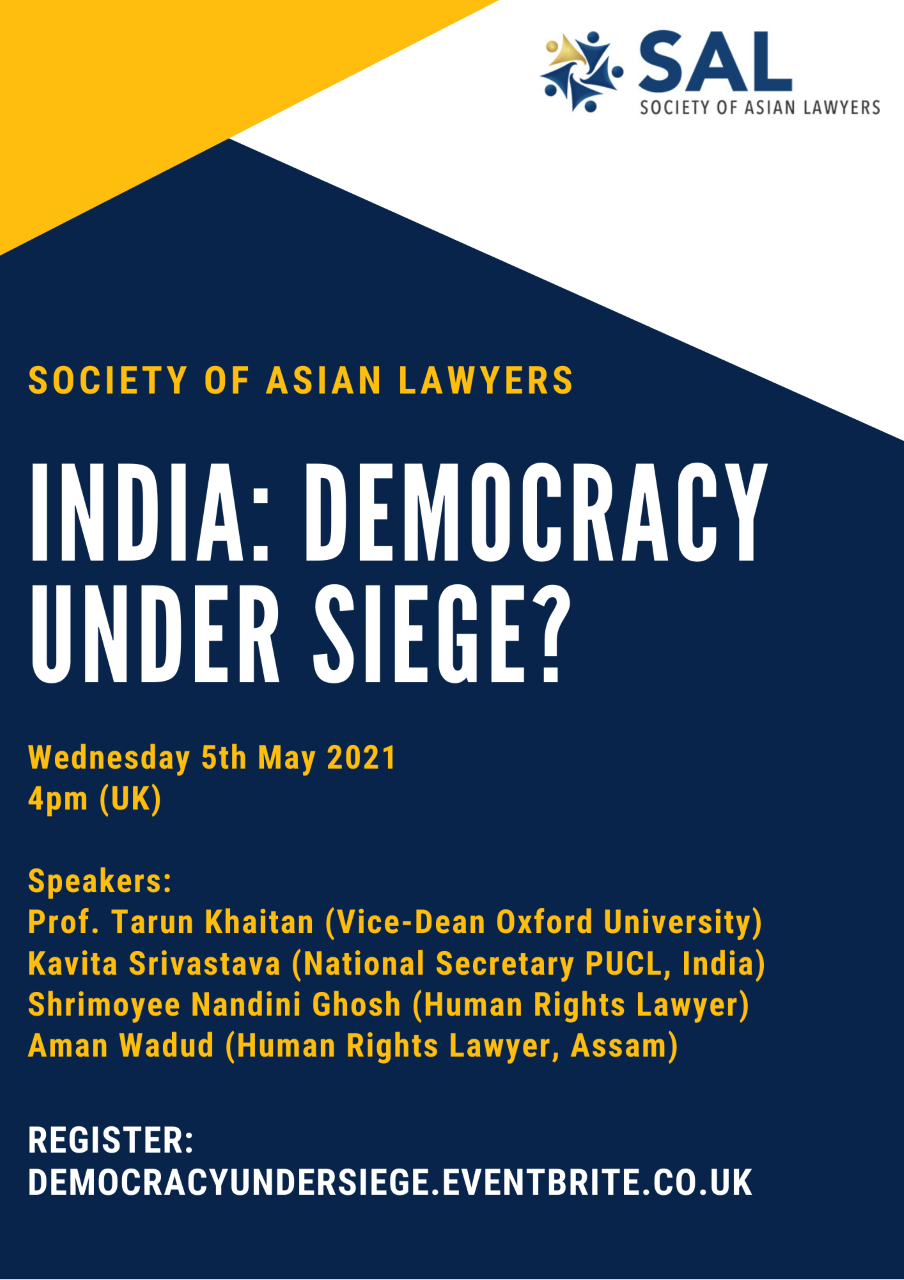 The events in India over the last 18-24 months have led many to criticise India’s attitude and approach to the rule of law, democracy and civil liberties. In the summer of 2019 the Indian Government revoked Article 370 thus removing Kashmir’s special status and statehood of Jammu and Kashmir while detaining the democratic leadership of the state. There have also been regular internet blackouts since then which has suppressed communication.

In August 2019, the final National Register of Citizens (NRC) for Assam was published. To be included in the Register, families were required to provide documentation to show their lineage, without which they were deemed “illegal foreigners”. When published, the Register omitted 1.9 million such people, effectively stripping them of their citizenship. Thousands have since been detained in temporary camps.

In December 2019, the Indian Government introduced the Citizenship Amendment Act which provides a pathway to Indian citizenship for persecuted religious minorities from neighbouring countries. The Act however excludes Muslims from the eligibility criteria. This led to widespread protests which was met with repression from the authorities.

In September 2020, during the height of the COVID-19 global pandemic, the Indian Government passed 3 Farm Bills. Critics say that due process was not followed and the Bills were hurried through at a time when the world’s attention was occupied by the pandemic.

There has been widespread protests since November 2020 in response and these continue in Delhi. Videos have gone viral showing the repression faced by the protestors at various sites around Delhi at the hands of the Police. The State has cut off water and electricity supplies to protest sites as well as the internet. Journalists have been prevented from reporting with many arrested and jailed for simply doing their job.

Any opposition to Government actions is deemed “anti-nationalist”.

The US organisation, Freedom House has recently downgraded the status of India from “Free” to “Partly Free” in its 2021 annual global survey.

In March 2021, The V-Dem Institute in Sweden, published its Democracy Report in which India was downgraded to an “Elected Autocracy”.

We will be assisted by an expert panel:

Professor Tarunabh Khaitan is Professor of Public Law and Legal Theory at Wadham College (Oxford) and a Vice Dean at the Faculty of Law (Oxford). He is also a Professor & Future Fellow at Melbourne Law School, working on a project on the resilience of democratic constitutions, with a focus on South Asia. He specialises in legal theory, constitutional law and discrimination law.

Kavita Srivastava is the National Secretary at People’s Union for Civil Liberties (PUCL) India. PUCL is the largest human rights organisation in the country, striving to defend civil liberties and human rights of all members of society.

Shrimoyee Nandini Ghosh is a lawyer and legal anthropologist, whose work focuses on questions of rights and justice, and the law’s relationship to everyday forms of subjectivity and violence. She has worked with local coalitions and organisations on a number of human rights documentation and litigation efforts in Kashmir, Mumbai and New Delhi.

Aman Wadud is a practicing lawyer in Assam, where he provides ground-level legal services and support to those who are at risk of being stripped of their citizenship status, owing to the National Register of Citizens (‘NRC’) process. He appears before the Guwahati High Court and the Foreigners Tribunals in Assam, and has also argued before the Supreme Court of India. He has recently received the Fulbright-Nehru Master’s Fellowship for 2021-22, and hopes to continue to build on his work through this opportunity.

If you have any questions for our panel, you can submit these before the event by e-mailing secretary@societyofasianlawyers.co.uk