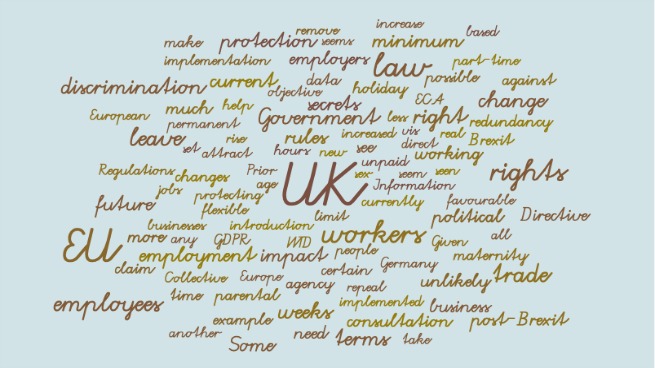 As some big companies relocate teams to Ireland and mainland Europe, there has been short-term growth in employment in the UK. Conversely, long-term predictions by political and economic pundits are that domestic unemployment will rise notwithstanding measures to lower corporation tax which may help plug the gaps. Experts predict Brexit will adversely affect trade and investment to the UK. However, changes to workers’ key legal rights are doubtful and unnecessary, as UK law generally offers equal or better protection to employees, than the EU.

The current EU Regulations governing employment are implemented into UK law by the European Communities Act 1972, which is the primary piece of legislation. To remove the impact of these regulations would require repeal of the ECA 1972. It is extremely unlikely that any UK Government will attempt to repeal the ECA 1972 because it would trigger chaos and far too much uncertainty for employers. Above all, there is no need to change the status quo.

Certain employment standards are in fact better in the UK than in our European counterparts. For example, Health and Safety and Discrimination and Equality legislation in the UK are streets ahead of EU law.

In terms of pregnancy and maternity leave, UK rights provide a minimum of 52 weeks’ maternity leave (unlike the EU minimum of 14 weeks). Post-Brexit, it is possible, if there is political will, for us to see a change in the current right of workers on maternity leave to carry-over their unused holiday entitlement to another year.

Holiday pay is another right where the UK minimum (5.6 weeks’ holiday) exceeds the EU minimum (4 weeks) and thereby offers a greater benefit to UK workers.

In some instances, certain rights of employees are under-utilised so there is no obvious desire to effect change. An example of this can be seen in terms of parental leave, which is an EU-based right providing up to a maximum of 18 weeks’ unpaid parental leave for each child. In 2015, the UK increased the age limit so this leave can now be taken up to a child’s 18th birthday. However, this right is unpaid, therefore not many people make use of it.

Several rights protecting employees do not originate from the EU in the first instance, so Brexit will not have a direct impact on these rights. Examples of UK based rights are the right to minimum wage; statutory redundancy pay; to take industrial action; paternity leave; shared parental leave; flexible working; to claim against unfair dismissal or unauthorised deductions from wages.

Some of the more controversial areas derived from the EU, which could see change, affecting employees, are:
(a) Working Time Directive (WTD) which places restrictions on hours and holidays;
(b) Temporary Agency work.

In terms of the WTD, a future UK Government might be keen to remove the limit altogether in the interest of employers or possibly to change the rules so that perhaps hours spent “on-call” or travelling count as working time.

Thanks to the EU, after 12 weeks, agency workers currently acquire the same basic working conditions as equivalent permanent staff. This is an area where a Government to the left of the political spectrum could seek greater protection for agency workers.

In terms of discrimination law, prior to joining the EU, the UK had protection against race, sex and disability discrimination. The EU has extended these rights to include discrimination based on age, religion/belief and sexual orientation. Under EU law there are no caps on the amount of compensation for discrimination and a post-Brexit future UK Government may want to introduce a cap, although there does not seem to be a political consensus for such a move.

TUPE and Collective Redundancy Consultation rights emanate from the EU. Conceivably, a relaxation of the rules on provision of information and consultation would make transfers of business easier and swifter. Where 100 or more employees are facing redundancy, consultation periods were reduced from 90 to 45 days in 2013. Presently the threshold for the number of employees affected to trigger collective consultation is 20. Potentially this threshold could be increased to say 100, but without doubt the trade unions would object.

The EU introduced the right of employees to claim certain amounts from the Secretary of State if their employer became insolvent. Given Brexit’s expected impact on business and the current cross-party rhetoric on the need to protect jobs, it would not be electorally popular to take away this right from employees.

Finally in terms of data protection and trade secrets, both of which have been reinforced through recent changes in EU law, we are unlikely to see much departure from the current EU rules. Prior to the introduction of GDPR, the Information Commissioner emphasised the importance of maintaining international consistency on data protection and welcomed the introduction of GDPR, which has led to stricter penalties and rules for organisations that handle personal data.

The EU Trade Secrets Directive was implemented into UK law by the Trade Secrets (Enforcements, etc) Regulations 2018 and seeks to harmonise the law relating to trade secrets throughout the EU.

In reality, existing UK common law and precedent was largely consistent with the Trade Secrets Directive. A deadline was given for implementation of the Directive and the UK complied with this, but countries like Belgium, France and Germany delayed their implementation period, with Germany only passing the law at the end of 2018.

The objective of this new law is to promote trade, innovation, investment and cross-border collaboration. Again the view here, in the UK, is that by harmonising our law with mainland Europe, we will help to prevent theft of trade secrets and set out a cohesive set of civil remedies and sanctions for breaches.

The aim of the UK post-Brexit will be to increase opportunities for businesses to locate in the UK. That means keeping rules surrounding companies that trade across the EU, harmonious with the EU and continuing to afford workers the levels of protection to which they have become accustomed in the UK. It will be electoral suicide to start eroding workers’ rights. Further in comparison to the EU, the UK has enjoyed a much longer history of protecting employees’ rights and there seems no reason to deviate from this tradition.