We have brought together innovators within the legal industry to take part in a panel discussion with Robert Bourns, Vice-President of The Law Society and chaired by Jo Sidhu QC to explore the themes raised in the report and to provide insight to practitioners into the real changes afoot.  You will have the opportunity to put questions to the panel on any of the issues which are raised. There will also be an opportunity to speak about the issues more informally and network over some drinks and snacks afterwards.

The programme for the evening:-

Robert Bourns, Senior Partner at TLT, was elected Deputy Vice-President of The Law Society in 2014 and took office as Vice-President in July 2015. He is the incoming President for 2016.

Robert joined Council in 2011 and is an elected member of the Management Board. He is one of five representatives for the City of London constituency, a member of the Law Society’s Equality and Diversity Committee and a member of the RAB Regulatory Processes Committee.

James established the 17th Alternative Business Structure law firm in 2011 and the first new litigation firm. James is also an experienced litigation solicitor who has specialised in all elements of Commercial and Property Litigation since 2001, handling cases at the Lands Tribunal, LVT/FTT, County Court, Magistrates’ Court, High Court and Court of Appeal. He is a member of the London Solicitors Litigation Association and the Property Litigation Association. James has lectured on law for the Royal Institution of Chartered Surveyors and Hertfordshire University and spoken at many events, including at the London University of Law. James has also delivered several Legal Master classes for Thomson Reuters and written for the New Law Journal, RICS Commercial Property Journal, News on the Block, Property Law Journal, Solicitors Journal and Legal Week.

Nadeem Thanvi has been the managing partner of leading human rights law firm ITN Solicitors since it was established in 2003. ITN is known for its ground breaking work on issues such as protest law, police powers, Universal Jurisdiction and terrorism. The firm now has an international reputation and is often asked to represent clients in the ECHR, the African Union, the ICC and at the UN. The firm has also been involved with a number of Supreme Court matters in recent years such as R v Jogee which recently changed the law on joint enterprise.

Nadeem still specialises in defending cases of serious organised crime, homicide and fraud but recently has concentrated more of his time on guiding the firm through the shifting sands of today’s legal and economic landscape. Under his leadership ITN continues to be recognised as one of the leading criminal and human rights practices in the country and has managed to establish several new departments which are quickly becoming recognised as leading in their own right.

With a decade of experience as an innovator and business leader in the UK legal sector, Mark specializes in creating and growing new businesses based on market insight and customer need. Mark runs the UK business for Rocket Lawyer, a San Francisco based technology company backed by Google Ventures, which provides online legal services to consumers and small businesses. Prior to joining Rocket Lawyer, Mark led legal business development at LexisNexis UK, creating new products for lawyers, and before that was a user experience consultant in various industries.

Sunita studied law at Leicester University and then York College of Law. She qualified as a solicitor in 1994 and became a member of the Law Society’s Children Panel in 1998 specialising in acting for children in Public Law cases working in Lincolnshire and Nottinghamshire.

In 2005 she was appointed as a Deputy District Judge on the North Eastern Circuit and changed jobs in 2007 to become the Legal Director of NYAS (National Youth Advocacy Service), a Children’s Charity that specialises in acting for children in intractable court cases.

Sunita was also appointed Chair of the Law Society’s Family Law Committee in 2008 and started doing lots of policy work in this role.

In 2009 Sunita made a career change and whilst sitting as a Deputy District Judge, she was appointed as an Independent Advisor to the Home Secretary for Criminality Information. This entailed advising and writing 5 reports for Government which were published both in England and Wales and Northern Ireland and entailed changes in the law under the Protection of Freedoms Act. She was awarded a CBE for this work in the Queen’s Birthday Honours list in June 2014. Sunita became a full-time District Judge in October 2012 and spent 18 months working in Cambridgeshire before being appointed to the specialist Family Court in London.

In December 2015 Judge Mason was seconded to the Independent Inquiry into Child Sexual Abuse which is headed up by Justice Goddard.

This is a must attend event for all practitioners and for those looking to get into the profession. The event is free so book your place now by e-mailing your RSVP to: secretary@societyofasianlawyers.co.uk.

We hope to see you there! 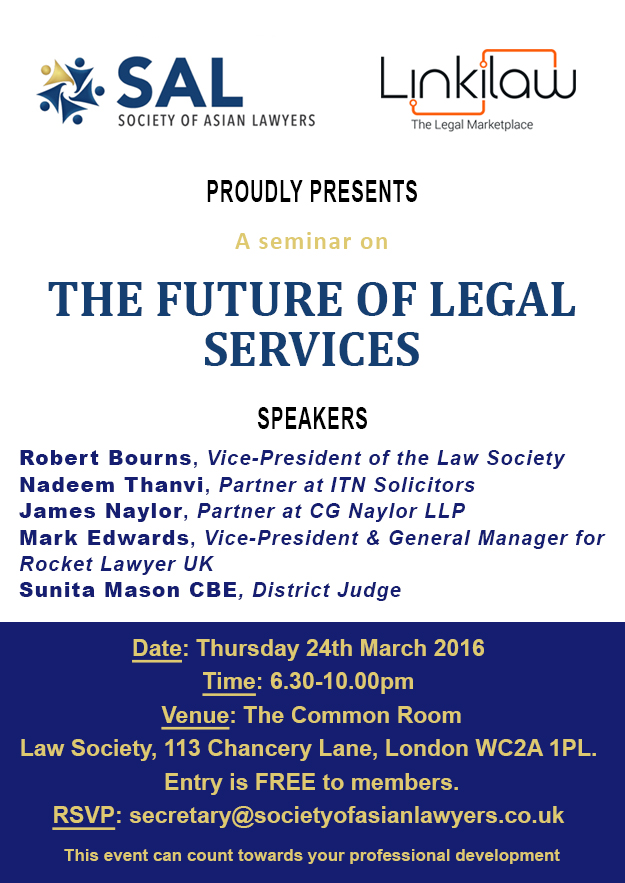