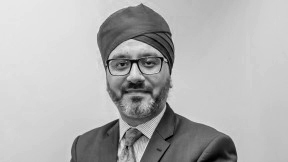 Ranjit is an experienced solicitor. He qualified in 1999 and developed his practice in the area of personal injury law working at the national personal injury firm, Thompsons. He currently works at the Government Legal Department where he specialises in personal injury litigation and coronial law.

He also works as a visiting lecturer at BPP Law School, delivering the civil litigation and medical negligence/personal injury modules.

Ranjit has been a mentor to LLB students at the University of Derby since 2011 where he also was a visiting law lecturer between 2014-2018.

Ranjit is passionate about diversity within the legal profession and has been a driving force behind SAL’s recent campaign of events, ‘Diversity and the Judiciary’, which have been held in London, Birmingham and Manchester.

When not at work, Ranjit’s interests include reading about Sikh history and watching (as well as occasionally playing) sport, particularly football. He holds the FA Level 1 Coaching qualification and coaches a local football team, Kit Out London Academy (u-10s). Having been born and raised in East London, he supports his local team, West Ham United.