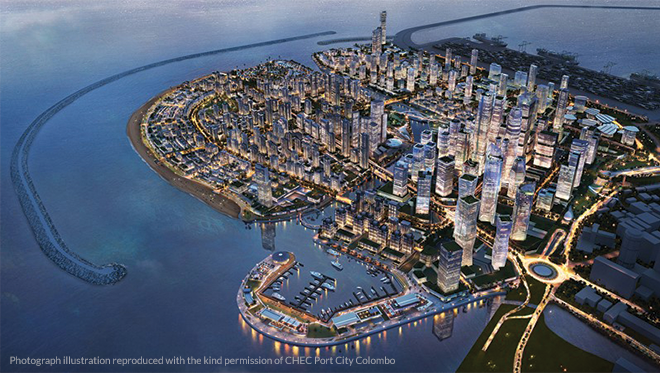 Sri Lanka is creating an amazing and exciting international commercial and financial hub, in the middle of the Indian Ocean.  Set off the coast of this tropical island’s capital city and business district of Colombo, the innovative Port City project seeks to create a special economic zone attracting investors and big business through either a low, or zero, taxation policy.  The city will facilitate the work of global corporations thereby bringing new jobs, investment and opportunities to Colombo.  At 665 acres the new high-tech urban environment will be a similar size to Central London.

Colombo is widely regarded as South Asia’s cleanest and most habitable city. Situated at the crossroads of all travel – East to West and back – Colombo is the centre of the maritime silk route.  The city has good relations throughout South Asia, making it the ideal place for global trade and international business.

There are no issues relating to nationality that would cause any hindrance to free movement of peoples, goods or services.  Funding from China has enabled 269 hectares of land to be reclaimed from the sea to the south of the harbour at Colombo opposite the Galle Face Green. The new Port City will be protected from rising sea levels and high waves by a 3km offshore breakwater.

The project is officially known as Colombo’s International and Financial City (CIFC) and will operate under its own special jurisdiction with economic and commercial laws based on English law.  The legal system of mainland Sri Lanka will remain the same.  It comprises codified and uncodified laws, all of which are subordinate to the island’s Constitution.

Sri Lanka’s history of diversity has resulted in a mixed Roman-Dutch Law and English Law legal system with certain aspects of Kandian, Thesavalamai and Muslim Law playing a part when it comes to rules on inheritance, marriage and divorce.  Criminal law is already based on English law, so it should be relatively easy for new laws designed to prevent financial crimes in the Port City to simply act as an extension of the existing legal framework.

Agreement on the content and procedure of the legislative provisions is underway.  New legislation to govern commercial disputes, combat fraud, in particular anti-corruption, anti-money laundering and proceeds of crime has been drafted to ensure the effective authorisation and regulation of banks and financial institutions which locate in the Port City, to safeguard CIFC’s reputation and encourage foreign investment.

Investors from all over the world are itching to get their hands on opportunities in this new dynamic city which is being billed as a sun-kissed paradise where luxury and sophisticated technology come as standard.  The plan is to create 5 key urban districts: International Island (a commercial and leisure hotspot featuring a resort, theme park, exhibition centre, health and education facilities and a water park), Island Living (comprising residential villas and public parks), Central Park Living (for apartment living), Financial District (with outstanding office and retail space) and The Marina (which provides access to the Indian Ocean and will include water features and public parks).  Canal quays, beautiful promenades and boulevards will link the 5 districts.

The core challenge however for the Government and the people of Sri Lanka is to achieve an appropriate balance between the Rule of Law, economic development and strategic, geopolitical vested interests.  It is necessary to navigate a sensible pathway to avoid a legally binding set of circumstances that could result in erosion of national sovereignty and territorial integrity.  Ebullient emerging market leaders must be cautious of debt-trap diplomacy.

Consequently, lawyers (particularly those who understand the hidden commercial implications and geopolitical tensions arising from fallouts in bi/multi-lateral agreements) are no doubt pouring over the finer details of this remarkable project.

Ultimately, this Chinese signature investment may well yield a never-ending source of contracts and disputes although whom you represent, for the desired outcome positive or negative, is probably the better question.